Let’s back up a second. I have loved Tyler Anderson since the day he walked into Mrs. Schulkind’s 5th grade classroom. I don’t know where he came from… another school, another state, heaven perhaps?

There he was in his blue izod sweater, layered over a little white button down shirt.

And there I was with all my 9 year old awkwardness, hair freshly shorn up to my ears and thick, sky blue glasses courtesy of Mom Style.

This crush lasted through middle school and high school. He was an AV club geek and I was a loser. It should have worked but, alas, our love was not to be realized.

I remember little of those years but I remember with startling clarity the hole rusted through the passenger side floor of Tyler’s car. I remember writing papers in his bedroom and marching to the principal’s office together when we were accused of plagiarizing each other. (We didn't plagiarize each other! It was an honest mistake but our teacher was a righteous cunt!)

Travel forward in time 15 years… my crush and I had lost touch. But then miracle of miracles - Facebook! There he was in all his glory. My Ty-Ty!

Suddenly we were friends again, chatting and laughing only now we were confident adults! I hated my ex more than ever and I have Tyler to thank for giving me the motivation to get rid of my ex without needing to employ the eviction services of Mr. Biggs.


And then on day we were both single! We talked all the time about completely inappropriate things, he admitted he’d had a crush on me too and then he found a nice Jewish girl who wanted babies. Those babies fucking ruin my chances every time.

That’s okay, though, because the real Tyler could never live up to Fantasy Tyler.

Real Tyler can’t live up to what I have in the here and now with the Love of My Life who is imperfectly perfect for me. 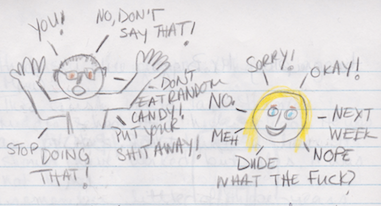 Real Tyler would never put up with my dogs and my moods and my social ineptitude.

Real Tyler wouldn’t stand up to me and keep me in check and tell me when I’m getting fat because I made him promise to tell me.

I can’t help but wonder, though, what would life have been like if I’d become the wife of a Hollywood producer? Would I have kids? Would I walk the Red Carpet? Would I be as happy as I am now with my imperfectly perfect manly man?

No, I wouldn’t be happy. I don’t like kids and I don’t want crotch blossoms of my own. Red carpets seem like torture and god knows I’d say something that would get my producer husband black balled for a decade. We’d lose everything and end up living in a box under a bridge somewhere!

Ugh, I’d probably have to entertain if I was Mrs. Hollywood Producer. Who wants to do that? That sounds awful. 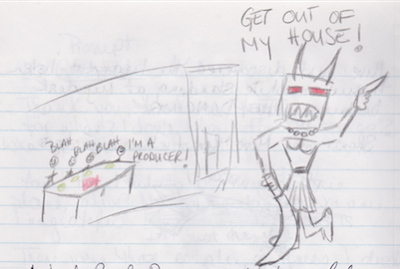 And after all of that he’d leave me for some barely legal slut with a slammin’ bod’ and good fashion sense because - Hollywood Producer.So no, I wouldn’t be happy. I’d be miserable being somebody everybody else wants me to be.

I bet Real Tyler is really bad at sex. I am not giving up mind-numbing, life-altering sex with Manly Man. Not even for fantasy sex. Not when what I have in the real world is right from every angle. I mean, do you know how hard it is to find a guy who doesn’t want kids and doesn’t think it’s weird to have separate bedrooms? It’s hard! It took me 36 years to find one of those and I am not giving him up.

What is right now is like waking up on a cold and snowy morning with perfectly toasty toes.

There's A Psychopathic Princess In My Head

Jess
I live on the side of a mountain with my dogs and the Beast Master. There's a psychopathic princess living in my head and very little cell reception.